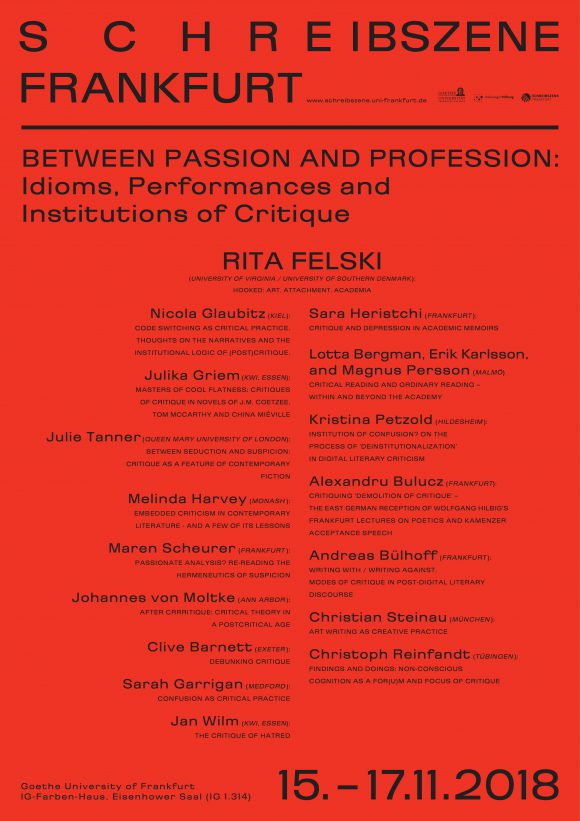 The lecture deals with the emergence of Art Writing in the second half of the 20th century asa literary genre in its own right. As part of the creative industries, Art Writing deals with the creative production of knowledge-based analyses and judgments ofart works, exhibitions as well as the historically or systematically questioning of aesthetics and the aesthetic field. With regard to the conference subject, my talk presents Art Writing as a hybrid genre that consciously crosses disciplinary borders and questions the traditional idiosyncrasy and performance of Art Criticism and its institutional relations. Whereas classical Art Criticism @SchreibszeneFFM#crritique16adheres to the status and function of the critical judgement, textsof Art Writing question the place of judgement. In that respect, Art Writing emphasizes the literary constitutionof the production of signs and signification. By seeing Art Writing asPraxeology that emerged in the late 20th century within the aesthetic field of Contemporary Art it is possible to understand the emergence of Art Writing from its epistemological and practical background. Thereby the lecture stresses modes of institutionalization (such as study programmes, prizes, grants,scholarships and fellowships)and opens upquestions about the increasing signification of creativity in 21th century aesthetic field.