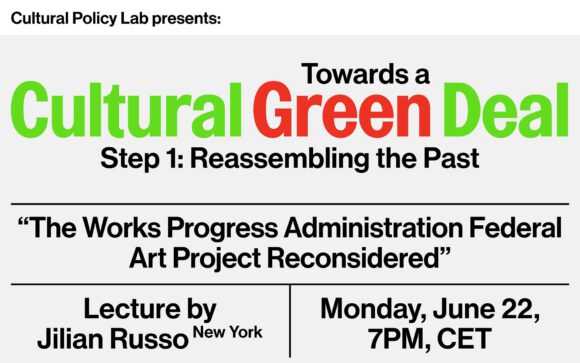 On Monday, 22nd June we we discussing the cultural program of the historic Roosevelt New Deal with Jilian Russo.

Jilian is a New York based curator and art historian. In her PhD, she studied the archives of the “Federal Art Project” — one of the biggest and most influential arts funding and cultural infrastructure programs ever.The Works Progress Administration Federal Art Project (WPA/FAP), which operated from 1935 to 1943, was a program created by Franklin D. Roosevelt (1882–1945), WPA director Harry Hopkins (1890–1946), and FAP director Holger Cahill (1887–1960) to employ American artists throughout the Great Depression.

In her lecture, Jilian Russo reexamines the FAP by looking more closely at Cahill and defining his populist approach to American art, which made the FAP not only a massive work-relief program for artists but also a major public education initiative. Cahill’s democratizing ideas on art were sparked by his experiences as an Icelandic immigrant and hobo in the Midwest and informed by the theories of Progressive era philosophers including John Dewey and John Cotton Dana. The FAP, in addition to employing prominent artists such as Stuart Davis, Arshile Gorky, Lee Krasner, Jackson Pollock, and Mark Rothko, sponsored local and national exhibitions and established thousands of local art centers, including the renowned Harlem Community Art Center. These accomplishments laid the groundwork for the emergence of Abstract Expressionism and success of the post-war American art market.

Jillian Russo is a Brooklyn based curator and art historian. She is currently Director of Exhibitions at Hollis Taggart Gallery. From 2013–2018 she was curator at the Art Students League of New York, where she organized exhibitions including The Masters: Art Students League Teachers and their Students and On the Front Lines: Military Veterans at the Art Students League of New York. She has written articles for American Quarterly, CAA Reviews, Panorama, and The Brooklyn Rail. She received her PhD from the Graduate Center, CUNY with a focus on modern and post-war American art.